The 6 Major Risks of Liposuction to Consider

All over the world, staying fit and free from excess weight remains a major concern for both adults and young people.
Keeping fit involves strict diet routines and regular exercise which bring.
But this doesn’t always yield fats results or even enough results especially for grossly overweight people.
This is where more drastic alternatives such as liposuction come in.

Liposuction is a surgical means of eliminating fat by making an incision at a natural crease on the individual, inserting a cannula to a layer of fat, then aspirating the fat within. Simple as it sounds, it has a number of risks which we will look at.

As with any major surgery, liposuction carries risks, such as bleeding and a reaction to anesthesia. Other possible risks of liposuction include:

With liposuction, there is the risk that the patient might end up getting what s/he was trying to avoid – fat. This is because the process distorts distribution process. Following the uneven removal of fat from a certain body region, the body struggles to restore homeostatic balance. As a result, more fat is distributed around the areas from where they were recently lost – replacing fatless areas and oversupplying areas withlittle fat. In the end, the patient might end up disfigured.

The risk of developing Type 2 diabetes increases significantly after a liposuction surgery.

simply refers to failure of body cells to respond positively to insulin.
Obviously, this artificial inefficiency of insulin leads to the build-up of sugar – a condition known as hyperglycemia.
When this hyperglycemia is not dealt with, the inevitable end is Type 2 Diabetes.
Recent post liposuction studies have shown that it affects insulin resistance.

Men handle liposuction way better than
women do.
This is because many female hormones such as estrogen need fat for proper metabolism.
While a woman in her prime may more likely handle this better, older women are in much more trouble.
Getting rid of these natural fat deposits implies that they would be at the mercy of hormonal imbalance in later life especially after menopause.
Frequent mood swings and other mental health problems cannot also be ruled out as fat helps the brain work well. 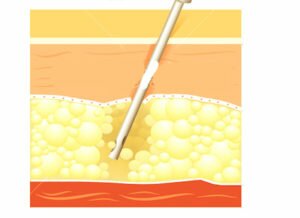 During the liposuction process, several piece of fat break free from their natural positions but are often sucked away via the cannula.
There is the chance that some of these fat pieces will not be properly aspirated during surgery.
As a result, they could enter the patient’s blood stream in abnormal quantities (hyperdipidemia), get trapped there and constitute what is medically known as embolism.
This predisposes the patient to several cardiovascular diseases one of which is Fat Embolus Syndrome.

Sucking fat from the body during liposuction also distorts the body’s natural distribution of liquid.
An example is the physiological third space which accommodates a certain quantity of liquid.
This shift in fluid balance post liposuction could end up in this third space; hence causing swelling.
This swelling is often very difficult for the kidney to handle, thus predisposes it to damage.
While fluid which accumulates just under the skin might be easily drained with a needle, it takes more to eliminate the ones that accumulate inside.

This is perhaps one of the rarest risks associated with liposuction, but it is still a risk worth patients’ attention.
While most liposuction surgeons put in extra care in during surgery, the need to suck fat out of a large are of a patient’s body may lead to speedy probing with the cannula.
Any internal injury inflicted in the process is dangerous and if undiscovered early enough, could prove fatal.
It is recommended that people who undergo this surgery be followed up with post-surgical assessment for both signs of internal injuries and infections.

This procedure is not recommended for everyone looking to burn fat.
For many people, a simple adjustment in lifestyle, diet and exercise will be enough to eliminate fat.
However, there are people whose only hope of eliminating excess fat lies in a drastic surgical procedure such as liposuction.
However, they must have elastic skins which can fold into new contours or crease so that their skins will not sag after the procedure.

Additionally, they must be in good health and free from certain health conditions such as diabetes.
On the other hand, liposuction may be used to treat fat tumors known as lipoma; accumulation of lymph in one part of the body (lymphedema), and elimination of fat around a man’s breasts (gynecomastia).